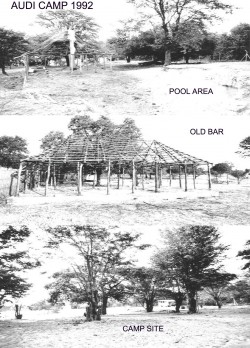 Audi Camp acquired the lease on a property, previously know as Kubu Camp (Kubu meaning Hippo and we certainly found out why later) on the outskirts of Maun in the village of Matlapana in 1993. What was acquired was more of a rubbish dump than a campsite, I think we pulled out enough car parts to start our own second hand dealership; we still have an old chassis that doubles as a tank stand.

On this property there was an old slab with a mopane structure on it that may have been a storeroom at some stage, this we turned into a bar with basic thatch and a few reeds. Amazing what you could get away with in those days, how we managed to get a license I still have no idea but we did. Initially we could only afford to buy a case of beer at a time, most of which was drunk by the managers, but after a while we got a bit more reckless and got in some spirits which meant we now needed a liquor storeroom. The person who added this on (probably one of our helpful drunks) wasn’t thinking too clearly and put the hinges for the door on the outside… so we had our first robbery, done by non other than our security guard. He “ingeniously” worked out that he could unscrew the hinges, pop inside, grab a bottle of brandy, screw the hinges back on again and no one would be any the wiser. Except for one small detail, he left the brand new torch we had given him inside. Had the cheek to ask for another one the next day!

The other thing that had to be sorted out as frugally as possible was the ablution block. There was an old broken down one that we managed to adapt again with a few reeds and some rickety old doors. We couldn’t afford a roof so it was left open to the skies. People seemed to enjoy this and we had a lot of positive comments especially from the local pilots who suddenly seemed to find it necessary to divert over Audi Camp! These ablutions were unisex which no one seemed to object to too much except of course the licensing guys who were horrified. We put the required sign on each entrance and erected a temporary barrier between the sexes. Once we had the licence in hand we took down the barrier but left the signs. This caused much hilarity as couples would part outside only to come face to face a few seconds later.

As we celebrate our 20th year of Audi Camp, it’s great to think back to these beginning times. And what would be a better way to start up the blog on our new website but with stories of the very beginning?